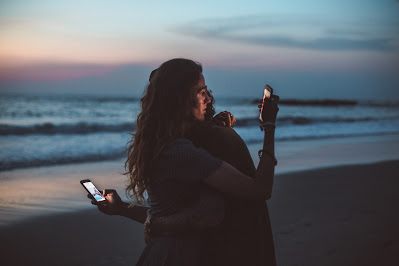 "Set you minds on things above, not on earthly things."

Every week I get an alert from my phone asking me if I'd like to view my phone usage report.  I always ignore it.  It's one of those annoying features that I'd shut off if I knew how, and it's not quite annoying enough to figure out how.

But I looked at it a few weeks ago.  I was stunned!

I could not believe how many hours A DAY I was spending on my phone!  Four hours!  That's 28 hours a week!  The other stat that surprised me was how many times a day I pick the phone up and look at it.  And the report showed me what I was doing on my phone and for how long.

I guess it shouldn't be surprising.  We use our phones for everything from calls, to emails, to texts, to social media and entertainment.  We play games.  Most people grab that phone and look at it whenever they have a spare moment.  We just can't be bored for one second anymore.  Even if it's no longer than a trip to the third floor on the elevator.

I decided there's a lot better things I could be doing with 28 hours a week than staring at my phone--much of that time I was spending on entertainment (social media and videos).  And it was not easy.  I was surprised at just how many times I day I instinctively reached for my phone.  I started leaving it in my car, or leaving it in my bag.  Sometimes I even left it at home (I know, shocking right?).

The first week I cut it in half.  Down to two hours.  It was very difficult, but I found I had so much more time, and more importantly, I wasn't as distracted all the time.  Every time that phone dings, or vibrates, I'd drop what I was doing and look at it to see what it wanted.  It's crazy.

The next week, I decided a good rule of thumb would be to use it as a tool rather than for recreation.  And that's been the rule ever since.  I use it just for the necessary, and very little for recreation.  I'm very comfortable now at about 90 minutes a day--that includes all my phone calls, texts, emails, banking, etc.  And a few minutes in the evening for recreation.

Think how much better off we'd be if we focused as much time thinking about spiritual things as we do looking at social media, playing games and looking at funny videos.  Think about how little time we actually spend today just thinking?  Spending a quiet moment to gather our thoughts without constant distractions.  Not very much I discovered.  We wonder why we're so stress, and so exhausted, and so behind all the time.

We are addicted to our phones!  Don't believe me?  Next time your phone dings with a text message . . . don't look at it right away.  Feeling a little anxious?  Yup . . . I've been there.