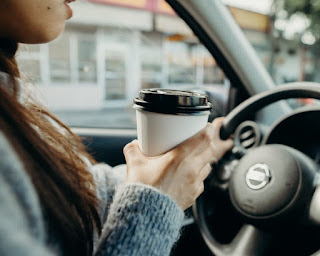 I read the devotions in "Our Daily Bread" almost every morning.  I think it was last week I read one that had a story about Glen.  He enjoyed being a blessing to others.  When he went through the drive through at the coffee shop, when he’d get up to the window, he would pay for his coffee, and then also pay for the order of the car behind him.  He'd ask the cashier to wish the car behind him a good day.  There’s more to the story than that, but I really liked that story, and I thought that was a wonderful way to bless somebody unexpectedly and build a little treasure in heaven at the same time.  And that’s what I was thinking about a few days later when I swung through the Starbucks drive through.

I decided I was going to do that thing Glen did.  I noticed there was a young couple in the car behind me, and I decided to pay for their coffee.  I get to the window, and I hand the cashier my card to pay for my coffee, and I ask her if I can pay for the car behind me.  I get this blank look from the cashier.  I'd never seen her before.  She says just a moment, the window closes and now she’s talking to another employee I'd never seen before, and they’re glancing over at me.  Then the manager joins the conversation and now three of them are stealing glances at me.

This a busy location at 8 o’clock in the morning.  There’s probably a dozen cars behind me and that’s not at all unusual there in the morning.  And this is taking a long time.  I’m beginning to regret it.  I'd picked the wrong day--we obviously were training new employees today.  I notice the couple in the car behind me are getting agitated.  You know, the couple I'd decided to bless with my kindness.

The manager comes to the window and says, “so you want to get the order for the car behind you, too?”  I said yes, if that’s not a problem. No problem she says.  And she has another lengthy discussion with the cashier and that other employee.  Everyone seems to be clear on what was going on.  Whew!

The new employee rings me and the car behind me up and charges my card.  She hands my card back, and then she starts to hand me a car carrier with three drinks in it instead of just one.  And I have to tell her I just wanted to pay for the order behind me, I didn’t want to take it with me.  I just wanted mine.  And there’s another delay.

And now they’re talking again, and I hear a car horn several cars back.  And I’m thinking surely I’m not the first person that’s ever done that here.  Am I?

Finally I get my coffee and pull out.  But I wasn’t done yet.  At this particular Starbucks, when you drive out, you swing around the building and you drive by the entire line of cars waiting in the drive through.  Of course they all knew it was me that tied up the window for so long.

I tried not to look at the angry faces of all those people who I blessed with my generosity.

I realized what worked for Glen in the "Daily Bread" devotional might not be the best way to go about being a blessing for me.  I think I'll find a different way . . .

P.S.  I told my wife this story when I got home that day.  She does this frequently.  Never had a problems she said.  I guess I'm just lucky!