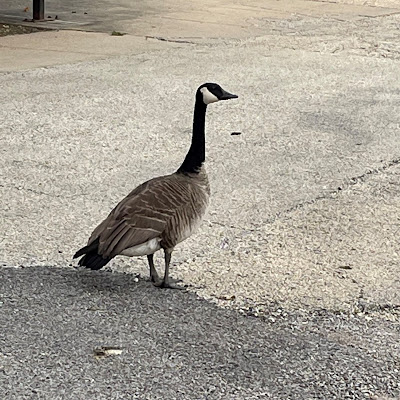 It wasn't going that well for me.  When we first started working from home, I didn't like.  But I've grown used to it.  My wife works.  My youngest goes to high school.  It's been just me and my dog, Daisy, for the majority of it--we added a puppy named Scooter a few months ago.  I've been pretty happy working from home.  Going back to the office has been a bigger adjustment than going home.

I dread going in on those three days.  Last week, I realized my attitude was the biggest problem, so I decided I was going to work on that.  I got up early.  I put on a nice tie.  I stopped and got an overpriced cup of coffee.  I was trying the best I could to have a good attitude about it.  When I get to work, I walk to my building whistling as I went.  As I walk around the corner, I'm confronted by a very large goose.

And he looked perturbed.

And we just stare at each other for a minute, when suddenly he charged me.  I dropped my coffee and I ran like a girl.  I don't know why exactly.  It seemed like the thing to do at the time.  But suddenly I realize I'm running from a goose!  So I stop, and turn around to confront him face to face.  But he keeps coming.  So I kicked at him, missed, and fell down.  The goose waddles off, and I get up and brush myself off.

I walk back to the door where I'd dropped my coffee.  Amazingly the lid hadn't come off.  I picked it up--I lost half of it, but I took a big drink of it.  Then I noticed the two workmen standing outside the next building over.  They were just staring at me.

They weren't there when I arrived.  I realized what they had seen was me walk around the corner, pick a coffee cup up off the ground and drink from it.

"Still warm," I said as I waved at them and held up the cup. They didn't react at all, and I went inside.

I had a good laugh about it, and I felt better about going back to work.  I'd have missed that experience working from home.  I realized I could do this again.  I've been doing it for more than twenty years.  But I did hope I didn't encounter another goose.

Oddly enough, when I went to work the next morning, there wasn't one goose at the back door of my building . . . there was entire flock!  Like they were saying to me, "We heard you tried to kick our friend!"

It was a little too Hitchcock for me.  I walked around the building and went in the other door.