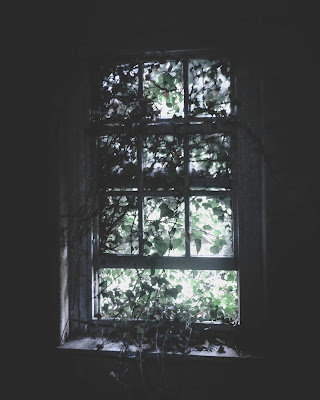 The world renown theologian Karl Barth had a famous anecdote that I'll try and tell you in my own version, and add some of my own thoughts to it.  It went something like this:

But one day the children noticed the windows, and they pulled a ladder over to one of them, and wiped away the generations of grime that had collected over the panes, and looked out.  And what they saw surprised them.  There were people outside that window, walking up and down the streets seemingly oblivious to the warehouse they lived in.  And as the children are watching these people in wonder, suddenly these people are all looking up in the sky and pointing (maybe there was an airplane or a rainbow that caught their attention).  The children wonder what they're looking at and look up as well.  But all they see is the ceiling of the warehouse.

The children were curious, so they pried that window open and went into the world outside the only reality they'd ever known and explored.  And when they returned and told the adults about this amazing world outside the warehouse--how do you think those adults reacted?

They weren't interested.  Their reality was the warehouse.  The warehouse was real.  It was all they knew, and all that mattered to them was the reality they'd created in the warehouse.

You see, the children were forever changed.  That warehouse was where they lived, but they knew there was a world well beyond the walls of their warehouse far larger and more real than anything they knew in their warehouse society.  They knew it because they had seen it and experienced it.

What do I think?  I think we all live in a warehouse.  Too few of us know that.  We get caught up with what's going on in our warehouse--our values in the warehouse have become things our society has created.  The values outside are far different than what our culture accepts as normal.  We get caught up in what's going on in our reality without any consideration that there's a larger reality out there.  The children know it, but they are children and have very little influence on the society that's developed in the warehouse.

At some point those people knew of the world outside the warehouse--somebody built the warehouse, right?  The society over time decided to isolate themselves from the real world outside.  The society decided that they didn't want to be a part of the world outside anymore, and they'd rather live isolated from that--they wanted to do their own thing on their own terms. And their society over time evolved further and further away from the values they once knew and shared back when they built a warehouse to live in.  And they barely remember those concepts embraced by that world outside.  Those concepts of good and evil.  Right and wrong.  Morality and immorality. The values of what is real and true and right. And their society is slowly dying as a result.

Whether they like it or not, whether they accept the reality of the outside world or not--one day that outside world is going to turn its eyes towards that warehouse.  That outside world IS the reality.  The walls are going to come down, and the society inside is going to be shocked that these tall tales the children have been telling them are actually true.  And it's going to be late.  Too late to change.  Too late to go back to what they once knew was true.  They're not going to fit into the society of the real world--except for the children.  The children that tried to tell them all along about what they knew to be true.

But it's not too late for us to climb out of the warehouse window and start living in the real world--and bring into the light as many as we can.  That's our job.