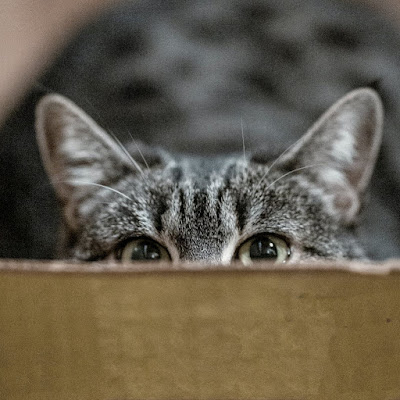 Many years ago, I kept seeing this little kitten in the evenings over along the edge of a corn field.  Sadly, people often dump strays out in the country, so it's not unusual for stray dogs and stray cats to show up at your house when you live far from town.
I started leaving food out for it, and everyday when I'd come home, the food would be gone.  I'd leave more the next day, but after I started feeding this kitten, I didn't see it much.  One evening I'd built a fire, and I was out sitting next to it.  It was very dark that night, other than the light from the fire. As I was sitting there enjoying the fire, I felt something brush against my pants leg.  I look down, and there's that little kitten.  It didn't want to be picked up, so I just pet it for a few minutes.  And then it wandered away.  As it left the fire, it went across the yard into the light cast by our farm light . . . and then I realized.  It wasn't a kitten at all!  It was a little baby skunk. Probably orphaned.
I was a little surprised to say the least, but finally decided it really didn't matter what it was.  I kept leaving food out every day, and it kept disappearing.  This went on for several months, and finally, that skunk stopped dropping by the house for meals.
I hadn't thought about that skunk for awhile, but I told that story the other day, and realized there was a lesson learned there.  I thought I was feeding a kitten, and it turned out not to be.  I've got to admit, it was a little nerve wracking that evening by the fire to realize I'd been playing with a wild animal without realizing it.  But even after I realized it was a skunk, I kept feeding it.  It could have been a baby racoon, or a baby possum, or a baby squirrel, or a baby fox--I'd have probably done the same thing.  I knew it was too young to live on it's own, and I wanted it to survive.  I wasn't looking for a pet, I was just offering a little bit of help.  Skunks don't make great neighbors, and I knew when I was feeding it (often reminded by my wife Valerie) that I may live to regret that decision one day.
But when you decide to help, the circumstances and the details shouldn't matter--it's the need you're addressing.
And Valerie was right of course.  About a year later, Valerie and I brought home a six-week old puppy--a little German Shepherd mix.  We named her Roxanne.  Within the first few months we had her there was an incident.  One evening she went after this little black and white "kitty" and wound up getting sprayed down. You just can't describe just how awful that is until you experience that smell up close and personal.  When dogs encounter a skunk the first time, they go one of two ways.  They either never go near a skunk again, or they decided "next time I'll do it differently."  Roxanne was in the second camp.  She never stopped.  I couldn't guess how many times Roxanne went after a skunk and got sprayed.  She lived 16 years, and would go after them right up to the end.
Every time we were de-skunking the dog out in the garage, Valerie would remind me again of how I'd actually helped that family of skunks get their start in our neighborhood.  But I wouldn't have done anything different.
~Todd E. Creason
P.S. I'm often asked about this since Roxanne had such a reputation for getting sprayed by skunks.  The only thing that works in removing that smell from a dog is shampooing them with a mixture of about a gallon of hydrogen peroxide and and a whole box of baking soda with about a tablespoon of Dawn dish soap.  Wet the dog down, then apply the special formula and rub it in good.  Let it sit for ten or fifteen minutes, then rinse it out.  And repeat as many times as it takes.  We tried all kinds of things in the beginning, but this actually works.  Roxanne is gone now, but we still have more hydrogen peroxide under our sink than we will be able to use in a lifetime . . .
Christian values Funny