A Great Storm Is Coming 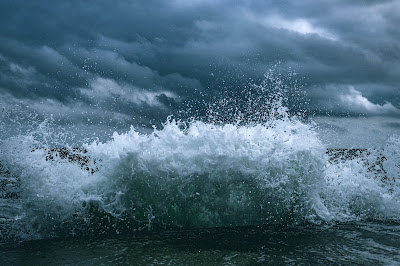 One of the big problems of our society today is we want to talk in terms of what is "legal" and what our "rights" are under the constitution and the law of the land. But that's the wrong way to look at things very often.  Are we suggesting that everything that is legal is right?  Are we suggesting that anything you can do because of the freedoms you have as an American is moral?

Are you kidding me?

I'm going to tell you something shocking. Many things that are not illegal are still wrong.  Many of the liberties you have as an American may not land you in jail but they are still immoral.

I made an error in judgement this week--it's not the first time, and I know better.  I got into a discussion on one of these hot topics of debate on social media--my intention was to point out that something a good friend of mine had posted was offensive.  He is a good person.  He is somebody I have known previously to be very tolerant and very open to other points of view.  He is somebody that in the past has sought to bring people together rather than divide them. I was quickly attacked for my point of view.  My friend didn't defend me or my right to have a different opinion--in fact, he piled on.  I was disappointed, but not surprised.

What did surprise me was the intensity of the attacks on me.  And the reason for that was plain to see.  Their argument was built upon sand, not rock.  They want to talk only about what is legal.  They want to talk about what their rights are.  But they know down deep they are strenuously defending something that is simply wrong--not illegal, but wrong.  They know the storm is coming and the streams are going to rise, and that house they've built on sand is going to collapse. And that's why they are so angry.  I pointed that out, and they knew in their hearts it was true.

I have no police record.  I've only had one speeding ticket in 35 years.  But that's not what I'm going to be judged on one day.  God isn't going to pull my rap sheet. God is going to look at how I've lived my life, and if I've lived it in such a way that is pleasing to Him.  In other words right and wrong, good or evil, moral or immoral.

Build your house on solid rock.