"May the Lord direct your hearts into God's love and Christ's perseverance."

I had a conversation a few weeks ago with somebody about faith.  He says he's an atheist, and questions anybody that would allow themselves to be "limited" by the "rules" of being a Christian.  He wanted to have a conversation he said, but what he really wanted to do was give a lecture about how silly I was to spend so much time studying in seminary, and how dumb I was to waste my retirement years going into Christian ministry instead of kicking back and enjoying my well deserved reward.  So I listened to him.  I interjected where I could, but he didn't hear me.  I left feeling sorry for him.  He is bitterly unhappy.  He is unfulfilled.  He has a secular view of the world and is unwilling to even acknowledge there may be a spiritual side of our nature that if he were to open up mind and his heart could show him there is a deeper purpose to his life. He is lost.

He's a hard case.  But it's all too common in today's world.  That dismissive attitude towards faith.  But God built us with a purpose in mind, and there's nothing limiting or restrictive about giving your life over to God.

I bought a new mower a few years ago.  A small push mower to do some trimming and mow some areas I couldn't get with my riding mower.  I didn't spend much on it, and as the saying goes, I thought I'd gotten what I paid for.  It didn't do a very good job.  It did okay until you got into taller grass, and then I'd have to go over it a few times to get it to cut.  And frequently I'd bog it down and stall the mower in grass that wasn't particularly tall at all.  I checked the blade, and it was razor sharp.  I thought I'd just bought a piece of junk.

One Saturday I couldn't get that mower to start, so I threw it in my trunk and dropped it off with the guy who works on my mowers.  He called me an hour to two later, and said he'd fixed it--it was a filter or something.  I picked it up, and he said, "Oh, and I fixed your blade . . . it was on upside down."

The blade was on upside-down.

I felt like the dumbest man on the planet.  I hadn't noticed it.  I went home, and that mower worked perfectly.  It still works perfectly.  That's because it's running as it was designed to run.

My friend the atheist is that lawn mower with the blade on upside-down.  He's getting through life, but it's difficult.  He's unhappy.  He's not operating in the way he was designed so he is struggling needlessly against God's design that was built into him.  And he's afraid if he were to accept God or even acknowledge God he wouldn't be able to continue to live in the way he is currently living--which he openly admits is an unfulfilling and unhappy existence.

If he would open his mind and his heart, God would flip that blade over and he would quickly be transformed by the Spirit.  I've seen it over and over again.  I've experienced it myself.  That "a-ha" moment when you finally see what God had intended for you all along.  When you finally realize there is so much more to life than you knew before you accepted Christ.  As Christians our life is no easier--we have the same problems and same worries and same heartbreaks.  But we walk with God in faith and as such we have a powerful friend that helps us through all the problems we'll face through these short years we spend on earth until we reach our final reward.

Faith in God isn't about having limits and rules placed on us as too many non-Christians view it--it's about finally seeing the limitless. 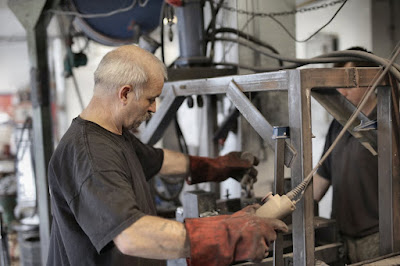 A friend of mine told me an interesting story that was useful to me--I thought I'd share it.  Early in his career, my friend worked in a manufacturing plant--on an assembly line.  It was challenging work, and he struggled in the beginning.  He wasn't sure he was going to be able to do it.  He was trying to match his pace to the pace of the machine, but he just couldn't keep up with the machine.   But as he looked around at the old-timers working at their stations, he noticed something remarkable.  They weren't having any trouble at all with keeping up with the machine, because they weren't working at the pace of the machine--they were working faster than the machine.  They had developed their skills to the point that they were always way ahead of where the machine was.   When he set his goal to be faster than the machine rather than as fast as the machine, the skills he needed to be successful in that job soon developed. We all have a daily routine--a machine.  Too