America Is Alive And Well 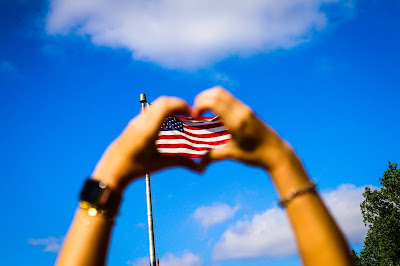 Finally, America is getting back to normal it feels like after COVID. Like many Americans my family has been dying to get out of the house and do things again.  We've been going to our local ballpark every Sunday afternoon to watch our local baseball team play the last few weeks. It's great fun--and way more affordable than the Major League Parks. I hadn't been to that ballpark in years!

The first week we went, I was down under the stands buying hotdogs before the game.  It's a very busy and very noisy place under the stands in the 75 year old ballpark (they've filmed movies there because it's definitely old school era).  I'd just gotten to the counter and placed my order when suddenly everything went quiet.  I looked around and everyone was just standing there.  Even the people at the concession stand were just standing there.  Frozen.  I wondered what on earth had happened.

And then I saw a guy take his hat off and I knew.  I listened, and sure enough, they were playing the National Anthem--you could barely hear it from the concession stand.

At that park, and many parks like it, you can't buy a hotdog during the National Anthem.  Or a pretzel.  Or a cold beer.  Veterans salute, and Americans take off their hats whether they can see the flag or not wherever they happen to be standing.  Not because they have to, but because they want to.  Nobody had to tell them what to do, they were raised to understand the National Anthem and what it means and they take a moment to show respect for the country that has provided so much to so many.

They understand America.  They understand freedom and the price we've paid.  And although we've all learned from our history that we haven't always gotten it right, we certainly have learned over time and have changed--and continue to change.  And regardless of what the media says, or our politicians say, or what they're teaching in our colleges and universities, most American know that America isn't a bad place.  In fact, it's a very good place.  Those fences and walls at our borders aren't to keep people in.  America is the promised land for many.  Because even people who aren't citizens here recognize what America represents.  Hope.  Freedom.  Opportunity.

Remember this the next time the National Anthem is played.  It's not just a song.  It's not just a tradition.  It represents an idea--an idea that is over 200 years old.  An idea that changed the entire world. The idea that God gave man certain unalienable rights, and amongst those are the rights to life, liberty and the pursuit of happiness.