Enough With The Jibber Jabber! 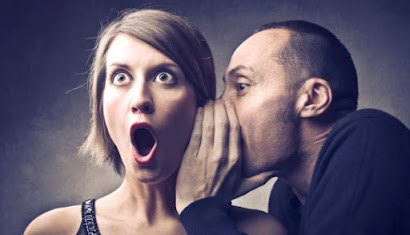 "Without wood a fire goes out; without a gossip a quarrel dies down."

Gossip has been at the heart of every conflict I've know in my life. It's easy to partake in it, and it's easy to fall victim to it. And if you're the victim of it, there's nothing in the world you can do to defend yourself from it. The more vigorously you defend yourself, the more it looks like the gossip about you is true.

Do you want to have peace in your life?  You want to have a nice work environment?  Enjoy your church family? Have a family that isn't constantly fighting with one another.  You'll never be able to accomplish that in an environment where gossip flourishes. I had a boss that understood that perfectly.  He had little patience for gossip. That was when the world was a little less politically correct--he'd be down in Human Resources in about two seconds today. He'd overheard a group talking about another employee and he'd come roaring out of his office, "Enough with the jibber jabber!" And if you said something about another employee to him, you better be able to back it up with cold hard facts. If you couldn't, you were finished. He tolerated zero gossip in his store. And it was one of the best places and happiest places I've worked.

There two things you can do about gossip in your life:

Learn To Mind Your Tongue

Work hard at guarding that gate!  Just don't do it. Don't share bad thoughts about somebody. Don't delight with others in the problems or issues of other people. Don't try and belittle somebody because they have less than you do, or because maybe they have more than you do. Don't try to tear somebody down because they're better at something than you are, or worse.

I just really have no patience for drama. I'm somebody that loves a good joke. I enjoy being around people.  I enjoy great conversation. And I love to laugh. But I couldn't tell you how many times I've fallen victim to gossips. I've been driven to be successful at everything I do, and I'm willing to work harder to accomplish those goals than anybody else. But in every endeavor that I have ever tried to excel in, there's been those that have tried to tear me down. In my first management job, I was nearly fired over accusations that were later proven untrue.  I've dealt with it in church groups, at work, in my family, and in fraternal groups I belong to.  And it used to make me mad.  When I was younger, if you pushed my buttons I'd put on a really good show for you--and of course give the gossips more to gossip about in the process. I was actually doing them a favor by adding fuel to the fire.

But don't let gossips and naysayers drag you off your path!

Our society today is a mess. It's always been a mess, but these days, so much of our entertainment is so negative. You watch Dr. Phil, and delight in the problems of other people--we sit back and laugh at the dumb things they say, or the silly ways they react when he tells them how it is.  We watch "Big Brother" and watch a group of young people in a house destroy each other through gossip and alliances--think about that for a minute.  And our kids are watching a constant stream of funny videos of people doing dumb things, and then they make comments like "what an idiot" and "obviously not a college graduate."  And our media is constantly teaching us how to judge people that have different beliefs, and how to tear people down that think differently, and how to humiliate and "cancel" people we don't like.  And we're consuming all that.

Are those your values?