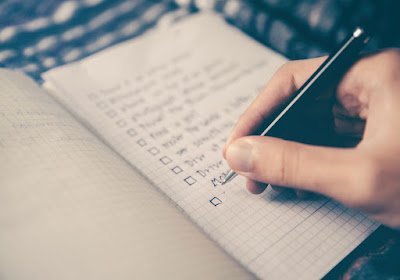 I used to work with a guy years ago.  Every Monday, he'd come in red-eyed and exhausted after a rough weekend and declare that this week was going to be different.  He was going to quit wasting his weekends drinking beer.  He was going to start exercising and get back in shape.  He was going to start a diet and lose that thirty pounds. He was going to go back to school and finish his degree and get a better job.  And he'd jump right in, too!
By Wednesday, he was "rewarding himself" with a cheeseburger.  Thursday night he'd go out and have tacos at a local pub.  Friday, he'd be red-eyed and exhausted again, and saying that after this weekend, starting on Monday, things were going to be different.  That was twenty years ago.  I ran into him the other day.  Still 30 pounds overweight (more like forty or fifty now) and buying beer at the gas station.
We all know somebody like that, don't we?  We've probably made similar mistakes--it's pretty common about the first couple weeks of January every year.  I certainly have.  I've set unreasonable goals and failed many, many times.  But I finally got a handle on it.  I finally found a few things that work.
Small Changes
I needed to get more exercise.  I sit behind a desk, and I got to a certain age when I started putting on weight.  But I didn't join a gym because I knew better than that--I'd never go.   I work on the third floor, so I started by not using the elevator.  Several times a day, I was up and down those stairs.  I did that until it became a habit--a couple weeks.  Then I added to that.  I started walking before work.  I get to work early, so instead of sitting at my desk sipping coffee and looking through my email, I walked for 10 or 15 minutes.  When that became habit, I started walking my lunch hour, too.  I couldn't guess how may years ago I started that, but I haven't used the elevator in years, and I still walk my lunch hour.
It's not about big transformative change.  It's about making small changes.  One small step at a time until that change becomes a habit.  Then take it just a little bit further.  Lasting change isn't about doing sprints towards a goal, it's about establishing new habits.
Keep Track
Determine what new habit you need to establish, and then track it.  I keep a daily journal--a bullet journal.  If I notice I need to lose a few pounds I set a small reasonable goal and I keep track of that goal in my journal.  Don't think in terms of temporary--you're working on a permanent habit.  If I'm gaining weight, it means I'm either eating too much (diet) or not getting out from behind my desk enough (exercise). Once I determine what I need to do and establish the change to my routine, I track it in my bullet journal until it becomes habit.
Always Seek Improvement
There's always some area of our life we can improve if we're looking for those opportunities. If we have difficulties getting along with other people--perhaps we need to improve the way we communicate or react to situations.  If we have trouble getting everything we need to do done each day, perhaps we need to improve our time management, or look at what's on a schedule, or possibly keep track of how we're spending our time for a few days.  You may be surprised how much time you're spending on social media, or watching sports for example.
Do It Now
My friend was always pushing change off into the future.  He'd jump in with a bunch of unreasonable goals, he'd do well for a few days, and then by mid-week, he was already postponing his start date to the next week.  And he's never gotten to next week yet.  Sit down with that thing that's bothering you, and figure out what you can do about it.  It's probably been bothering you for awhile--if you're not going to deal with it now, then when?  If it's not something you're actually going to take steps to change, then stop thinking about it, stop worrying about it, stop talking about it, and just accept it the way it is.  In the end, it's what you've done that matters, not the things you're "going to do."  Words are just words.  It's action that leads to change.
Things We Can Control.  Things We Can't Control.
There are things we can control, and there are things we can't control.  If it's a thing we CAN control, come up with a plan to address it in small incremental steps.  If it's something we CAN'T control, then we need to do the same thing!  That's right, you may not be able to fix the source of what's bothering you, but you can certainly fix the way you react to it!
Figure out if there's a better way of dealing with that situation you can't control. We spend a lot of time stressing over things we have no control over--but we are not helpless.  We DO have control over the way we react and deal with these things and establishing these habits is done exactly the same way--come up with a plan, establish a habit, and track your progress.
Change is hard, but it's not impossible.  Look at an old picture of yourself, and you'll see plenty of change.  You'll see your hairstyle is different.  Maybe different glasses.  Maybe a few pounds heavier or lighter.  Gray hair.  Change is the natural state of things, and it happens without us even realizing it, because it happens so slowly.  If we want to cause a change to happen, we have to approach it exactly the same way.  Slowly over time!
~TEC
Life Skills