Garbage In, Garbage Out 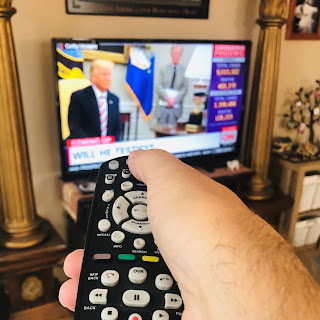 I wrote about Quarantine Fatigue on Sunday--a lot of people seemed to like that one.  A few people contacted me asking me how I planned to go about that break from media. I've done this before, so I thought for "Self-Improvement Wednesday" I'd share a few tips from my breaks before. Taking a break from the media, and from social media isn't impossible at all.  It may sound scary, but I'm going to tell you something from my own personal experience. I've never regretted taking a break from social media--what I've regretted in the past is going back to it.
Do Some Research
How much time are you spending watching television and on social media? Most phones will tell you how much time you're online. It's an easy thing to do to keep track of how much time you're watching news on television also.  If you keep track for a couple days, I think you'll be shocked at how much time you're spending especially on social media platforms.  If I had taken a guess, I'd have thought it was about 1/4 of what it actually was. I was stunned.
It's Not About Quitting--It's About Limits
Now that you know how much time you're spending on television and social media, you know how many hours a week you have to do other things. Obviously we can't stick our heads in the sand when it comes to daily events or ignore our friends--so set a daily limit.  I allow myself an hour of news a day, and a half an hour on social media a day.
I make sure I'm listening to actual news, and not opinion. There are still a couple real news broadcasts that simply report the news. That's what you should be looking for--just the facts, without being told how you should feel about it.
On social media, I give myself time to see what my friends and family are doing, and like a few things.  But I don't post anything. I don't comment.  And when I see things I don't like from friends and family, I take the time to make decisions about whether I still want to see posts from that individual or not--you can unfollow or unfriend toxic people. It's perfectly okay to do that.
Finding Better Ways To Spend Your Time
All that time you're spending on social media and watching news programs you could be doing something else. You could be reading books like I suggested--that's a big part of what I'm doing. You could take up a new hobby.  Take a class at the local community college. Get more exercise. There's no limit to what you could come up with.  All too often we say "oh, if I only had more time I'd do this" without realizing just how much time we're wasting on a daily basis that we could be doing just that!
How Long A Break?
I usually go with a Biblical number--I usually go 40 days when I'm trying to establish a new habit.  And I keep track in my journal.  I'm on day 2 right now, and that means I'm going to work very hard and be very focused about this until the end of July.  Then I'm going to reassess the situation.  Unlike before, I don't think I'm going to fall back into the social media habit again as I did before.  However, I am a lifelong political junkie, and I will start following current events again.  There will be one change.  During this break I intend to find better sources to take in that news without all the bias and the opinion worked into it.  As I said, they do exist still.
And Finally . . .
We do become what we consume.  As I said on Sunday, the media is not our friend.  It's almost entirely negative. It's biased. Just about every story these days has been politicized to the left or to the right. No matter which side of the fence you happen to be on, the media is shockingly dishonest in their reporting. We get a very distorted and very dark view of the world around us. Too many people are manipulated by this, and too many people actually believe this. Look for the facts, and watch carefully for biased opinion reporting disguised as journalism. Make up your own minds about things--don't fall into a media narrative. Learn to recognize it when you see it.  Just ask yourself this question after watching a story on the news. Are they telling me what happened, or are they telling me what happened AND how I should feel about it.  If it's the latter, your news source is biased and you're getting a narrative along with your news.
When social media began, it was great fun--a way to share with family and friends far away.  Too much of social media today is negative. I'm not even "friends" with many of my friends and family these days because I don't like the things they post, the opinions they share, the political rants they go on, or the things they think are appropriate to share publicly.  I've unfollowed many, and unfriended many more.
The bottom line. Don't consume garbage. So many people watch carefully what they eat. They make sure they don't eat things that are bad for them. They exercise. They drink healthy juices, and take vitamins to make sure they stay healthy. They watch their weight. They watch their blood pressure.  They watch their numbers. They understand that their body needs good, healthy nourishment to thrive.  Your brain is the same way, but we aren't nearly as careful about what we put into there. We should be. Try and be as aware of what you're putting in your brain as you are about what you put in your body.
~TEC
Life Skills